Q: “… You certainly have brought about a Copernican revolution in terms of language, lifestyle, behaviour and witness on the most considerable issues at the global level, even with atheists and with those who are far from the Christian Catholic Church. … Your linguistic, semantic, cultural revolution, your evangelical witness is stirring an existential crisis for us priests. What imaginative and creative ways do you suggest for us to overcome or at least to mitigate this crisis that we perceive?”

Pope Francis: “You said a word that I really like. It is a divine word. If it is human it is because it is a gift of God: creativity. And the commandment God gave to Adam, ‘Go and multiply. Be creative.’ It is also the commandment that Jesus gave to his disciples, through the Holy Spirit, for example, the creativity of the early Church in its relations with Judaism: Paul was creative; Peter, that day when he went to Cornelius, was afraid of them, because he was doing something new, something creative. But he went there. Creativity is the word.”

By now I’m sure you’ve seen the logo for the upcoming Jubilee of Mercy:

And I’m pretty sure you’ve seen at least a few reactions to it, ranging from the nonplussed Simcha Fisher to the outraged Eric Gajewski, who discusses numerous semiotic ‘resonances’ which the logo shares with Masonic lore. The image, reports the National Catholic Register, was created by Jesuit Father Marko Rupnik, also shows one of Jesus’ eyes merged with the man’s to show how “Christ sees with the eyes of Adam, and Adam with the eyes of Christ.” Incidentally, here is a slideshow of Fr. Rupnik’s other artwork; note the faces in the first painting.

Be that as it may, Unamsanctam wryly notes, “The motto of the Year of Mercy is ‘Merciful Like the Father’, despite the fact that Pope Francis says the purpose of the year is to the demonstrate ‘the church’s maternal solicitude.'”

The logo has triggered countless strong reactions, and is going to be plastered all over Catholic Parishdom for the next year and a half or so. You can expect more reactions to emerge and return as time goes by. One reaction in particular that will persist, to cite Unamsanctam again, concerns the motives and pastoral liabilities behind the jubilee as such:

“Lest you have any doubt that this Year of Mercy will be used as a propaganda tool to push for greater acceptance of deviant lifestyles, Archbishop Reno Fisichella, spokesman for the Year of Mercy, stated that ‘The motto, “Merciful Like the Father,” serves as an invitation to follow the merciful example of the Father who asks us not to judge or condemn but to forgive and to give love and forgiveness without measure.'”

In the same vein, Louie Verrecchio, with his trademark subtlety, sees the logo as one more tile in the revolutionary mosaic that he believes Pope Francis is crafting over the surface of the Church. To wit:

Others shall persist in seeing Masonic winks and nods in the logo. To wit:

Such speculation is par for the course with Pope Francis, since his every move has been analyzed as never before by Catholics and non-Catholics alike. Photos like the following are trip wires for conspiracy speculation:

(According to one guide to Lodge decorum, “The proper attitude of prayer is to stand with your arms crossed over your chest, with the left arm over right arm.”)

As if he were begging to be misunderstood by conspiracy theorists, below is the pectoral cross which the pope has worn even when he was a bishop:

(Note the sheep carried on the man’s shoulder’s, and how his arms are crossed.)

In any case, let us return to the logo itself. We cannot know how much input Pope Francis had in the composition of the logo, but two facts do seem pertinent. First, the image clearly hearkens to his pectoral cross, with sheep-like Adam resting on the Lord’s shoulders. Second, there is a famous photo of Pope Francis which is remarkably similar both to the logo’s design and to his own pectoral cross:

Certainly the easiest explanation is that Fr. Rupnik was aware of the pope’s pectoral cross and the photo with the lamb, and incorporated those elements into the design of the logo. Yet, I wonder if Rupnik’s influences were as uncomplicated as we might like to imagine. Or, assuming he was aware of the following video, we must wonder what it says about Pope Francis’s own theological cogency.

On 11 November 2013, Pope Francis had a video interview with Fernando Solanas, an Argentinian environmental activist. During the exchange, Pope Francis made the following remarks, among others:

(“Creativity is the word.”) 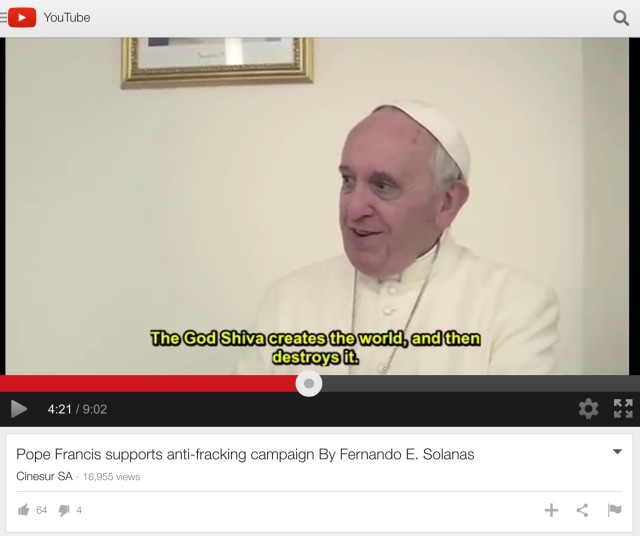 (“You certainly have brought about a Copernican revolution in terms of language, lifestyle, behaviour and witness…”)

For those of you still keeping score at home, here, as one friend pointed out to me, is how Shiva is depicted:

But that is not all, as my own curiosity revealed.

One legend involving Shiva concerns the death of his beloved Sati, and the rage into which Shiva flew to avenge her. “According to [one] version,” Wikipedia informs, “Shiva placed Sati’s body on his shoulder and ran about the world, crazed with grief. The Gods called upon the God Vishnu to restore Shiva to normalcy and calm.”

Here is how the story is often depicted in Hindu art:

“[D]ue to the sacramental dimension of sanctifying grace, God’s working in them [i.e., non-Christians] tends to produce signs and rites, sacred expressions which in turn bring others to a communitarian experience of journeying towards God. While these lack the meaning and efficacy of the sacraments instituted by Christ, they can be channels which the Holy Spirit raises up in order to liberate non-Christians from atheistic immanentism or from purely individual religious experiences. The same Spirit everywhere brings forth various forms of practical wisdom which help people to bear suffering and to live in greater peace and harmony. As Christians, we can also benefit from these treasures built up over many centuries, which can help us better to live our own beliefs.”

The lesson is, I guess, that as every time you ‘encounter’ this curious logo in the parish bulletin, countless Catholic blog sites, on a spiritual retreat, in the confessional, as a bumper sticker, in your weirdly burnt toast, etc., you can have your faith enriched by thinking on the loving rage of the Hindu god of destruction, Shiva. After all, we may be living the myth of Shiva in our day, so it can’t hurt to know that we can always lean on his shoulders when times get tough. After all, creativity is the word.

Catholic convert. Quasi-Zorbatic. Freelance interpreter, translator, and web marketer. Former ESL teacher in Taiwan (2003-2012) and former public high school teacher (2012-2014). Married father of three. Multilingual, would-be scholar, and fairly consistent fitness monkey. My research interests include: the interface of religion and science, the history and philosophy of science and technology, ancient and medieval philosophy, and cognitive neuroscience. Please pray for me.
View all posts by The Codgitator (a cadgertator) →
This entry was posted in Uncategorized. Bookmark the permalink.