“The elderly bring with them memory and the wisdom of experience, which warns us not to foolishly repeat our past mistakes. Young people call us to renewed and expansive hope, for they represent new directions for humanity and open us up to the future, lest we cling to a nostalgia for structures and customs which are no longer life-giving in today’s world.”

The following data are all care of Fr. Carota’s blog. Whatever the New Springtime and the New Evangelization are supposed to mean, I think the following data reflect the fact that winter is not over yet, and that, more important, perhaps the “Old Evangelization” wasn’t so bad, after all. I have previously drawn attention to such trends, and I think the cure remains the same: PUT SOME PENANCE ON IT. Briefly: 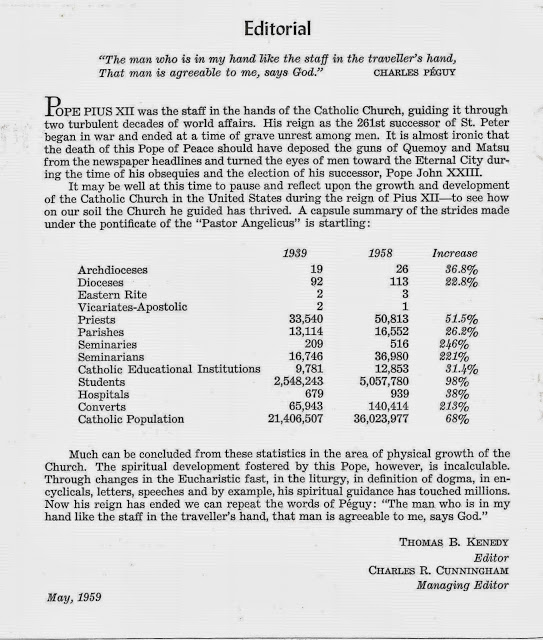 One is as always reminded of the quip that mental illness is doing the same thing over and over again and expecting different results. Is the claim that we have not been doing the New Evangelization over and over again “long enough yet”, or that we’ve “never really started” what Vatican II intended?

I don’t know what the defense of such a demographic catastrophe is, but I am sure that the primary rebuttal to data such as these will be a disingenuous mention of the post hoc ergo propter hoc fallacy. I call such an appeal disingenuous because of the nature of the case. Vatican II was called to modify the Church’s pastoral “strategy” in light of social and ideological changes in the world. Thus, we had two variables–supposedly “worse” worldliness and supposedly “better” pastoral strategy–which faced off at Vatican II for the good of the Gospel, and thus of the world. Perhaps the Church merely needed to apply That Ol’-Time Religion in a fresh way, the thinking went, in order to corral the world back under Her divine wings. Since changing the Church’s dogma was out of the question, time would tell which variable was actually a constant, the world’s perfidy or the Church’s evangelistic efficacy.

In the five decades since that Council, one variable has been shown to be a constant, and therefore cannot be cited as an explanation for changes in the other factor. The world has constantly persisted in its hatred and ignorance of God: it has remained true to its very effective “strategy”. Meanwhile, the Church has suffered a hundred alterations and permutations which have wrought disastrous consequences in Her own fold as compared to the constancy of the world’s apostasy. If the world had assumed a new anti-Gospel strategy after Vatican II had launched its new Gospel strategy, it might be valid to say that the AIDS-like decline of the Church (with all due respect to the gay lobby within Her folds) was due to changes in the world. Since, however, Vatican II was implemented precisely to redress those nascent trends, and yet the Church thereafter has suffered even more devastating effects from those trends, it follows that whatever Vatican II was “intended” to achieve, it has, to put it mildly, not yet succeeded. Vatican II is a valid Council, to be sure, but so much of the “superstructure” erected upon it is but unrecognized cancerous tissue which must be excised and transformed in the uncompromising fullness of the Magisterial Biblical Tradition. 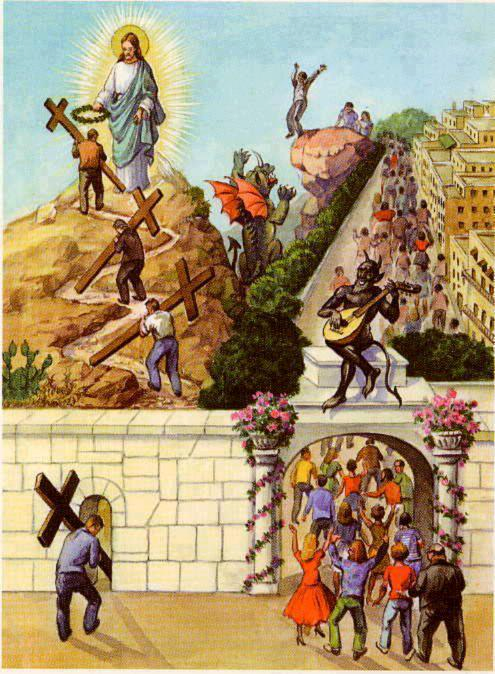 “Jesus, save Your Church.”

And now for the data.

After Vatican II (2013) only 23 % attend the Novus Ordo Mass (There is hardly any Latin Masses available anywhere).  That means that 77 % of Catholics no longer attend Holy Mass on a regular basis.

“31 Believe in the Lord Jesus, and thou shalt be saved, and thy house. 32 And they preached the word of the Lord to him and to all that were in his house. 33 And he, taking them the same hour of the night, washed their stripes, and himself was baptized, and all his house immediately.” (Acts 16)

I close with Fr. Carota’s diagnosis:

Soon we will be out of the “Vatican II Generation” and in not so long of a time into the “Traditional Catholic Generation”.  Death comes sooner or later for all of us.  Jesus, save your Church. …

If it had not been for the huge immigration of Mexicans into the United States, we would be seeing way more empty churches and pews.  Hispanics now make up 35 % of the US Catholics.  They are half as young as the Anglo Catholics and have more children.  But as they have become modernist, progressive Catholics, they also use contraceptives and no longer have many children.  From this we will now begin to see a large decrease in Catholics as the Mexican immigrants stop coming into the the US and having only a few children.

Because the religious ed classes were still staying full from immigrant Mexican children, the American Church did not see the fruits of modernism and progressivism.  But now it will become very clear as the number of immigrants decrease and their birth rate declines.

The answer to all this demise is prayer and speaking the truth.  I am putting these statistics to show that the progressive and modernistic theology, that is taught in most diocese, is its own worst enemy.

Liberalism has no “children”, no future.  We traditional Catholics have a great future in God’s loving support and in many children and young vocations to the priesthood and religious life.

Verily, Jesus, save Thy Church, and restore unto us the joy of Thy Salvation!

2 Responses to It’s the oikonomia, stupid…